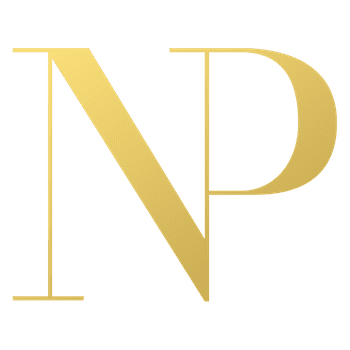 What I learnt from hosting my first Twitter Chat

Buffer defines a Twitter Chat as ‘a group of Twitter users meet at a pre-determined time to discuss a certain topic, using a designated hashtag (#) for each tweet contributed. A host or moderator will pose questions (designated with Q1, Q2…) to prompt responses from participants (using A1, A2…) and encourage interaction among the group. Chats typically last an hour.’

I wanted to build my engagement on Twitter and looking for ways to connect with people online. I have been on Twitter since 2012.

I am an Executive and Leadership Coach and I use the skills and knowledge I have acquired in my 20+ years in the Public Sector where I managed multi-million pound budgets. Now I work with other leaders who want to improve their own performance and that of their own teams so I am keen to connect with those leaders. When I am creating content on a daily basis, I think of them. Today, I have 46 blog posts and Vlogs on my website that can help solve my prospective clients’ problems.

I am also keen to connect with my fellow Executive and Leadership Coaches or colleagues who work in communication who have a similar audience to mine.

How did I prepare for it?

I learn from studying, reading and from others. My mentor for this has been Janet Murray (@jan_murray). I can honestly say that without Janet, I would never have done this. The idea became possible because she gave me a system and confidence to dare. I follow Kawula (@MikeKawula), Kim Garst (@kimgarst), Sam Flynn (@Samflynn) who educate me about social media.

I listened to 3 podcast episodes:

Episode 133: How to grow your following on Twitter with Mika Kawula. My main learning points were:

Episode 214: How to get more engagement on Twitter. My main learning points were:

Episode 151: How to use Twitter Chat to promote your business with Sian Conway. My main learning points were:

I read Janet’s blog post: How to take part in a Twitter chat (and why it’s good PR for your business). Janet mentions using apps to follow the Twitter Chat such as Hootsuite, Tweetdeck. I did not use those. My plan was to use TweetChat but it failed as it let me down at 9pm! My mistake was not to have a plan B.

I put a post almost every day on Linkedin and explain the benefits of a Twitter Chat:

I did the same for Twitter but could not explain the benefits of a Twitter Chat because of the limit on the number of characters.

I had 5 participants for my first Twitter Chat. As TweetChat did not work, I was multitasking between my MacBookAir and my iPhone.

Here are a few key moments from our discussion:

Here is a video about the Twitter Chat (there is no soundtrack):

I wanted to get some feedback on how I could improve:

I was very keen to write a blog about it so I did an online poll to get people’s opinions about the title: 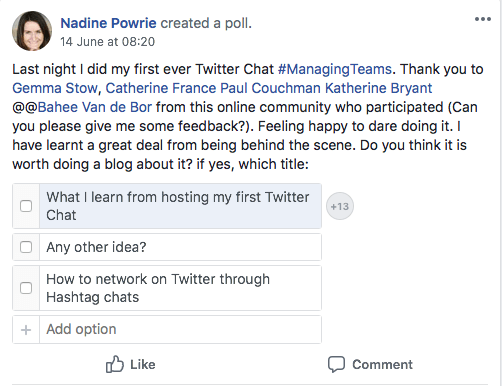 Impact for my business after my first Twitter Chat

Want to find out more?

Join my #ManagingTeams weekly Twitter Chat on Wednesdays 9pm (BST), 4pm (EDT) 1pm (PDT), for ideas and inspiration to manage your teams. Next week the topic is: communicating values and goals

This blog on What I learnt from hosting my first Twitter Chat gives you an opportunity to think about how you can host a Twitter Chat. I dare you to start your own and you will see how great it is. Thank you as ever for stopping by. What do you think of what you’ve read? I hope it’s helpful if you are thinking of looking for an Executive and Leadership Coach who does virtual coaching. Feel free to comment below or Tweet me @NadinePowrie with any comments or email me at npowrie@nadinepowrie.com.

It’s good to talk. I’ve just opened up new offers for virtual coaching. This is in response to my current clients’ feedback. You may also be interested in my Masterclasses.

Facebook
Google+
Twitter
LinkedIn
PreviousHow to have a Difficult Conversation: Part 4
NextThe difference between an Executive and a Leadership Coach